Skip to content
The last of the four Catholic colleges that I visited this Spring in the Scranton/Wilkes-Barre area was the University of Scranton.  My tour guide was Sarah, from Basking Ridge, who writes for the college newspaper and runs the women’s weekend retreat. 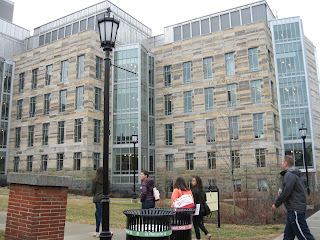 General – The University of Scranton is one of 28 Jesuit universities in the United States.  The 58-acre campus is in downtown Scranton with 88% of freshmen and 86% of all students living on campus.  There are about 4000 undergraduates and an average class size of 20.  About 62% of students are from outside of Pennsylvania.  The most popular majors are business, biology and communications.  The university also has occupational therapy, physical therapy, and nursing.  About 200 students study abroad each year.  They may study abroad for a short as a break and as long as a year.  There are three honors programs. 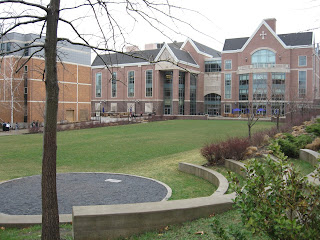 Housing – Living on campus is required for freshman and sophomores.  Housing is guaranteed for all four years.  87% of the housing is new or renovated.  The bathrooms are in the hall for freshmen.  Upperclassmen can live in quads, houses or apartments.  I saw a 4 bedroom, 2 bathroom apartment with a kitchen and living room for 4 seniors.  Here is a photo of the living room in one of the apartments. 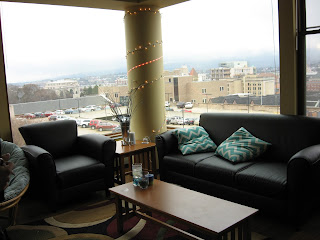 Extracurricular activities – The school has about 80 clubs and students can start a new club.  There are two theatre groups, performance music groups, an art gallery, a radio station, a TV station and 18 NCAA Division III sports; the school dos not have a football team.  The strongest NCAA teams are basketball, soccer and swimming.  There are also many club and intramural sports, including equestrian.  There is a 2.5 year old fitness center, and an indoor pool.  The students completed 180,000 hours of community service in one year.  The school has a retreat center on Chapman Lake; some of the weekend retreats are faith-based.  There is a campus shuttle and zip cars on campus.
Nearby – The Martz buses take students to New York and Philly.  The surrounding area boasts skiing, a water park, minor league baseball, casinos, shopping, an IMAX theatre, and minor league hockey.
Religion – About 70% of the students are Catholic.  Mass is available daily.  There are Moslem services on campus.  There are three synagogues within walking distance.
Applying – The school has a free on-line Common App application.  The middle 50% high school GPA of accepted students is 3.2 – 3.8, with a middle 50% SAT score of 1050 – 1240 (two sections).  The school is test optional under certain circumstances.  Entrance for the nursing, occupational therapy (OT) and physical therapy (PT) programs is more competitive, with a minimum GPA of 3.5 and  a minimum SAT score of 1150 (2 sections).  The school likes to see evidence of shadowing for nursing, OT and PT.
What’s new – U Scranton is building a new facility for OT, PT and exercise science.
Financial aid – The cost of attendance (i.e., tuition, room and board, book, transportation and miscellaneous expenses) is around $55K per year.  Merit aid of $8,000 to full tuition is available and given to students in the top 30% of their class with a minimum GPA of 3.2 and a minimum SAT score of 1100 (2 sections).   To get a full tuition scholarship students need to meet certain criteria, including a GPA of 4.0 and a minimum SAT score of 1400. Students who apply test optional can get merit aid of $8,000 – $10,000.  The school is considering becoming a CSS PROFILE school. 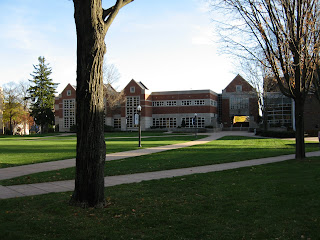 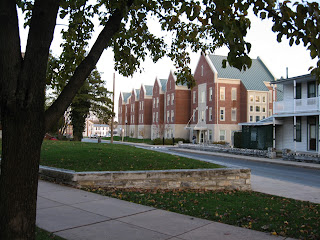 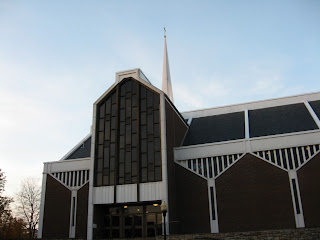 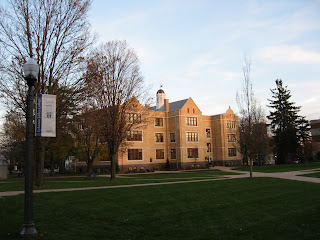 General: Lebanon Valley College (LVC) is a private residential college of 1630 students on a 345-acre campus in Annville, Pennsylvania, 10 minutes from Hershey. The buildings are architecturally mixed and the college has impressive physical education facilities. The 4-year graduation rate is 70%. About one quarter of students are commuters. The remaining students have housing for all four years.

What’s new: The school has just started a self-designed major, which must include at least two disciplines.  The school has a new President, Dr. Lewis Evitts Thayne, who came on August 1. He would like to increase the school’s diversity geographically, ethnically, internationally, and racially. Arnold Field was renovated over the summer with artificial turf, track resurfacing, and new lighting.

Academics: Teaching is the #1 priority for professors. Classes are generally small, with an average class size of 20. The largest classroom on campus holds 70 students. The school encourages students to study abroad/away, do internships and/or research. Students often do travel abroad in the summer (e.g., education majors in London, business students in the Netherlands). In addition to travel abroad in about a dozen countries, there is study away in Philadelphia and Washington DC. Education placements start in the freshman year. One hundred employers come to campus in January.

The school is probably best-known for its 6-year Physical Therapy (PT) program. The school also has other unusual majors including actuarial science, music business, music recording technology, and digital communications.

Extra-curricular activities: The school has Greek life, Division III sports, including football, and a Marching Band. There are 540 student athletes, 120 students in the marching band, and 100 students involved with the theatre. There are 90 clubs and organizations, including many faith-based groups. The students do over 18,000 hours of community service a year. There is a 4-day social justice program in January. 300 to 400 students attend the Friday night comedy series.

Admissions: The school has rolling admissions with 60 – 65% acceptance rate. The school is test optional.

All of the 4 types of music majors require an audition.

Financial Aid: 98% of LVC students get some form of financial aid. There is both need-based and merit aid.

There are multicultural scholarships valued between $2 and $12K.

PT majors receive one-third off scholarship for their 5th and 6th year of school.

LVC and Bias: When I visited in mid-November, a freshman had found a piece of paper with a sketch of a person lynched. The school responded quickly. There was a special edition of the school newspaper, a student and faculty gathering to raise awareness and speak out against racism, and the president responded. The school has a Bias Response Team, which was created in 2005 after several incidents of racial and homophobic comments in which two students were charged.