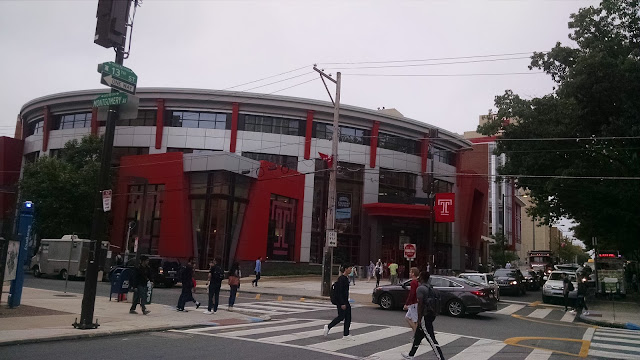 Introduction: Temple University is a public university with its main campus in North Philadelphia. There are other campuses including:
Temple University has about 27K undergraduates with an average class size of 27. There are lectures with teaching assistants teaching the recitation sessions.
Ambiance: There is a major street going through campus. There are lots of students around. Food trucks abound and there are many fast food outlets. The campus does not have a uniform building style and there is not much open green space.

Safety: The campus has 600 security cameras, 259 security officers and is the most-lit campus in Philly. The patrol zone is about 5 blocks outside of campus. Part of freshman orientation deals with being safe in an urban area.
Extracurricular activities: Temple has over 300 clubs and provides free student tickets and transportation to their football and basketball games.
Something surprising: The Tech building was filled wall-to-wall with hundreds of students on computers doing work quietly.
Construction: The Morgan Residence Hall was opened five years ago. A new health and wellness center opened in the Fall 2017. A new science building is being constructed and when it is finished, the two old science buildings will be knocked down and will be replaced with a green quad. A new library will open in Fall 2018 with a robot-retrieval system, the third in the nation..
Price: For out-of-state students the tuition averages about $28K/year and the Room/Board averages at about $11K/year. Tuition varies by college, with the Fox School of Business being the most expensive.
Applying: Temple University is a Common App school. Students who apply are automatically considered for merit aid and the honors program. Students who apply Early Action by November 1 are notified of acceptance by 1/10. Subsequent to that date, admission is rolling with a typical acceptance response in 4 – 8 weeks.
Temple recommends that students with an SAT score of less than 1000 who write well apply test optional. Test optional students are considered for merit aid.
Merit aid ranges up to full tuition plus one $4K summer educational stipend. Scholarship notification is by 3/1.
The average accepted student has a 3.56 GPA (weighted) and a 27 ACT or 1220 SAT. The ACT is not super-scored.
The average Honors student has a 3.9 GPA and a 32 ACT or 1450 SAT.
Housing: The Freshman housing deposit deadline is May 1. Students can pick their building usually starting in February. Housing is on a first-come, first-serve basis. Morgan Hall fills fast. Living/Learning community students can get rooms later. The View at Montgomery, is privately-owned off-campus housing right next to campus.